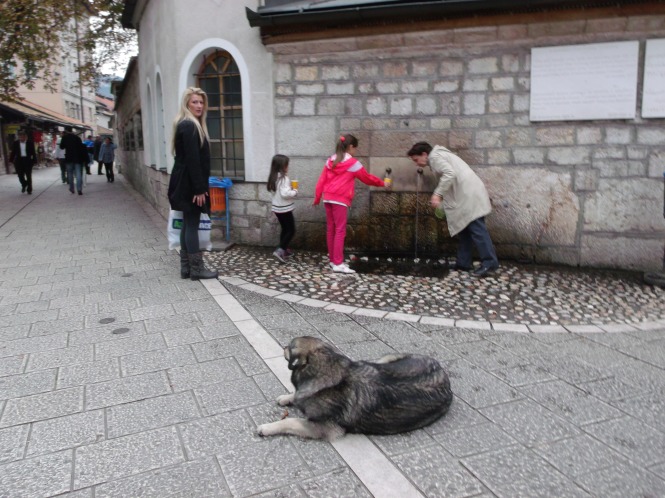 Note: Pujdo is a general name for an stray dog in Bosnia. If you do not have inspiration to name a dog, its name will probably just be Pujdo. This story is fictional, but written based on witness accounts of activists and a number of published articles.

It was the break of dawn. Orange sunrays were spread across the cold asphalt. Pujdo opened his eyes and stretched while still in a sleepy state. All drowsy he thought of food and wished to eat a juicy piece of meat today.

Eight in the morning. The orange sun turned into a yellow one. Pujdo is looking at people passing by him, but instead of going to search for food, he decided to relax a little more in the warm morning sun.

Aaaah! Pujdo detected a smell of fish coming from a bag carried by a woman passing by. He perked up and ran after the bag. Pujdo sniffed the bag, but instead of a delicious snack, he felt a hard hit of an umbrella on his back.

He retreated and yelped while his hopeful eyes still gazed upon the women “protecting” her bag. Beat and in shock, Pujdo received a few more hits directly onto his back.

The woman started screaming, “A dog is attacking me! Help me, people! He Bit me!”

Pujdo sensed what was happening and in an obviously submissive way, with fear in his eyes, he lifted himself a little bit and started wagging his tail. The women screamed again, “He bit me! He bit me!”

With his tail between his legs, beat up, Pujdo went on his way to a city park. When he reached some grass, his beat up bones and weak body stretched over the grassy surface. The sun warmed his tired body and he began to dream that he felt better.

A sound of screeching tires woke him from his dream. He opened his eyes and saw people in uniforms carrying dog catching tools. The naïve city dog, as Pujdo was, started to wag his tail welcoming them.

A few minutes later, Pujdo is engaged in a battle against the dog catcher’s tool, fighting to breathe, to save his life. He fought heroically, but the dog catchers were stronger! He was spitting blood, the noose was tightening, and he jerked around and whined as much as he could. “Let the dog catchers be,” said a woman passing by. Pujdo continued to spit blood while the dog catchers dragged him to their car. He knew that there was no hope left.

They dragged him into the car. Blood was gushing from his neck. The only thing separating him from an eternal sleep was one remorseless thrust to snap his spine.

No one ever found out what happened to Pujdo. But a heavy and dark night came over Sarajevo. And the next morning broke without the sun.

If you would like to help Journalists for Animals in their work in documenting what is happening for animals in Bosnia Herzegovina, or to assist in any particular rescue effort or case, please go to PAYPAL and make a donation to:

2 thoughts on “Today Pujdo Was Reported”